The most difficult part of making the L. Reuteri yoghurt is keeping the milk at 82C for 15 minutes. To make matters worse, some stoves (particularly old-style electric ones) are not easy to control quickly.

For many years I have had a couple of double-boiler and steamer sets which I use for virtually all my cooking. 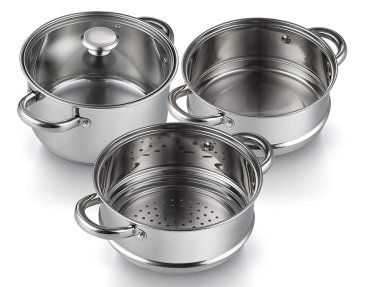 Base,  steamer and double boiler

The water goes in the base, I steam my vegetables in the steamer – and I slow-cook meals in the in the double boiler.

When I came to make the yoghurt, I found that heating and holding the milk was much easier to control in the double boiler. I heat the water in the base on a high heat until the milk reaches 82C – and then I turn the heat down low to hold the milk at that temperature.

A friend who had decided to try making the yoghurt found she simply couldn’t control the heat of the milk in a normal pan on her old-style electric stove. What could she do, she asked? Rather than invest in a double boiler/steamer set immediately – a Pyrex mixing bowl sat on a pan of hot water works just as well.

The saucepan needs to be about 22cm to 24cm wide.  The bowl is a 3ltr Pyrex mixing bowl

You can buy the bowl here

Get on with other things

You’ll need to keep an eye on the thermometer – but eventually you’ll get to know the correct setting on your stove to keep the milk at 82C. I am now able to put the milk in my double boiler, set the heat on high-ish and get on with other things for 15 mins. And I now know which heat setting on my hob will hold the temperature.

Again I can get on with other things for 15 mins – glancing occasionally at the thermometer and adjusting the heat if necessary. It’s a bit like steering a boat – you have to anticipate ahead of time. If the temperature looks like it’s heading in the wrong direction – adjust the heat before it gets there!!!

If your stove is really difficult to control the heat – an inexpensive, old-style heat diffuser may solve the problem:-

You can buy it here